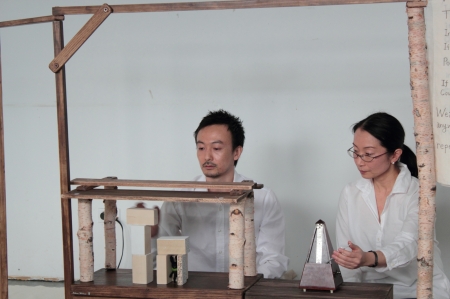 Nuclear plants tragedy and radiation emergency in Japan inspired Kiku Hibino to revisit his previous piece, “Desk Theories” (2010), an intensively electricity-dependent multi-media performance, and to create a sequel piece in collaboration with Yoko Katagiri and Aiko Kojima (Volvox Théatron). On site, there was a charity sale of Volvox Théatron logo-ed tote bags handmade by Yoko. Proceeds and all the collected donations will be sent to Japan Chernobyl Foundation, the NPO engaging in relief effort for victims of earthquake and radiation emergency in Japan.

Silent Tongues is a six-piece jazz ensemble based in Hyde Park, greatly inspired by the past and current innovations of Chicago free and avant-garde jazz, such as the Association for the Advancement of Creative Musicians. The group has striven to explore collective improvisation, conversations in sound, unfamiliar tones, and unique takes on well-known standards. Silent Tongues has received invaluable mentoring from South Side multi-instrumentalist and composer Mwata Bowden, and look to carry on the tradition of unique jazz music handed down by Bowden and his contemporaries. 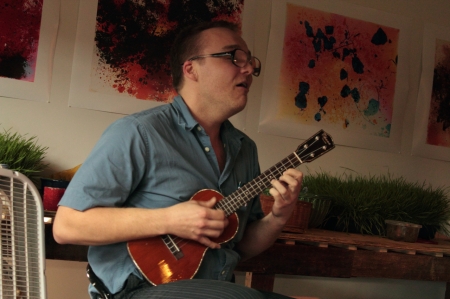 Artist Conrad Freiburg played his unique and beautiful songs on the Ukulele. Says Conrad, “I use the same innate or internal, self-taught styles popularized by Roscoe Holcomb.” Don’t miss his show It Is What it Isn’t at the Hyde Park Art Center! 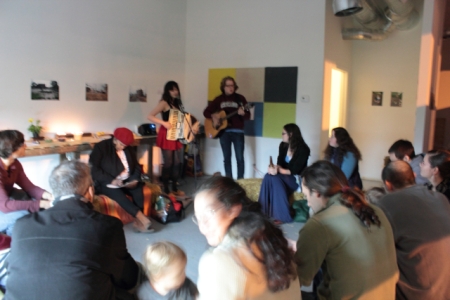 I think this first Open Mic night was a terrific success! We had over 30 people, the absolute cutest being two best friends under two years old who were literally the center of attention and deservedly so as they were absolutely charming performers.
We had a short set by “The Blue Light Specials”, poetry, jokes inspired by 7 year olds, stories, a concertina player, guitar sing-a-longs, a lovely a capella song, accordian music, and more. It was a wonderful evening and as we left, I was sure I heard the sprouts sighing. This can be understood in different ways of course, I didn’t ask.

The next Op Shop space will be located at 5226 S. Harper Ave where the old Dr. Wax record store used to be located. It will be operational from July 17 through August 15.

On June 15th we toured the space and got a personal tour of Hyde Park’s historical Harper Court by Peter, the grounds-keeper. We are very excited to have a space to work with that includes a storefront and somewhat of a back yard (in need of some weeding!) We are in dialogue about possibilities of engagement and looking forward to building relationships of interconnectivity through contemporary art happenings.
Below is a current picture of the space before a coat of paint.

ZELIENOPLE
Fri, April 30, 8:00 – 9:00 pm
Zelienople has long been a smoldering presence in Chicago’s experimental rock scene; the trio’s newest release, Give It Up (Type Records) is a murky, cinematic expanse of effects-laden guitars, subtle percussion and distant vocals.
LAKESIGNS
Fri, April 30, 9:00 – 10:00 pm
Lakesigns is two drummers, two guitarists, one bassist, one saxophonist, and hints of distorted ukulele and reverberated harmonica. Lakesigns, from Hyde Park, Chicago, makes layered rock music with a jazzy edge that sneaks up on you and feels good. Hear tracks at http://www.myspace.com/lakesigns.

Suggested donation of $5 for both bands. 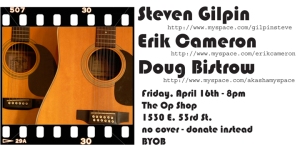 Erik Cameron is a singer, guitarist, and Hyde Park native. He writes songs about good and evil, joy and sorrow, and how to really make the most of your Friday nights. Check him out at www.myspace.com/erikcameron.

Steven Gilpin is a singer songwriter and native of Chicago. He has been singing and playing the guitar for fifteen years. Currently, he is finishing up his debut album, entitled Days Get Shorter (self-released). His music can be heard at http://www.myspace.com/gilpinsteve.

Doug Bistrow is a bassist and multi-instrumentalist from Chicago. After studying orchestral music and jazz in New York, Doug returned to his hometown to pursue a career playing with some of Chicago’s most exciting classical, jazz, folk, hip hop and pop musicians. Doug has performed at Soldier Field, Symphony Center, the Metro, Park West, Schubas, and many other venues. Doug writes, records, and tours extensively with Akasha, a rock-infused reggae band.

Conrad Freiburg’s “Ukulele Pieces” is a lovingly produced assemblage of songs written on the roads of America. He got paid for a job with a ukulele in California and has been boppin around the country with it ever since. It posesses a contemplative mountain style with a tinge of Great Dismal Swamp spooky. Come show your love for independent homegrown music.

This performance was filmed at the Op Shop on Sat, April 10.